From the shadows of the ancient, narrow streets of the historical centre you suddenly come upon the breath-taking majesty of Piazza Navona.

Piazza Navona is one of the most famous and beautiful of Rome's squares. The large and lively square features three magnificent fountains - Fontana die Quattro Fiumi, the Fontana del Moro, and the Fontana del Nettuno. Another eyecatcher is the Baroque church of Sant'Agnese in Agone. Let me introduce you to this stunning square!

The square is built on the former ‘’Stadium of Domitian’’, a horseshoe-shaped arena for foot races built in the 1st century AD.

The stadium was known as 'Circus Agonalis' (competition arena). It is believed that over time the name changed to 'in agone' to 'navone' and eventually to 'navona'. Or, it may be because “Navona” means big ship, referring to the mock naval battles held there. 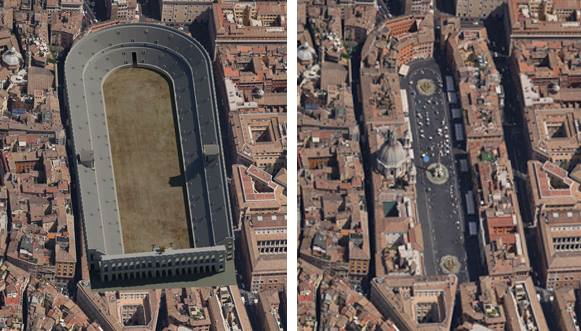 The grand refurbishment was commissioned by Pope Innocent X to give his family, the Pamphili’s (who owned most of the surrounding land), the greatest square in all of Rome. He not only did the work include the rebuilding of the church of  ''Sant’Agnese'' by Borromini, Bernini, and Girolamo Rainaldi, it was also the excuse to build one of the most astonishing fountains ever created, Bernini’s ''Fountain of the Four Rivers''. With various other fountains and shops, the ''Museo di Roma'', and even a statue of ''Pasquino''. 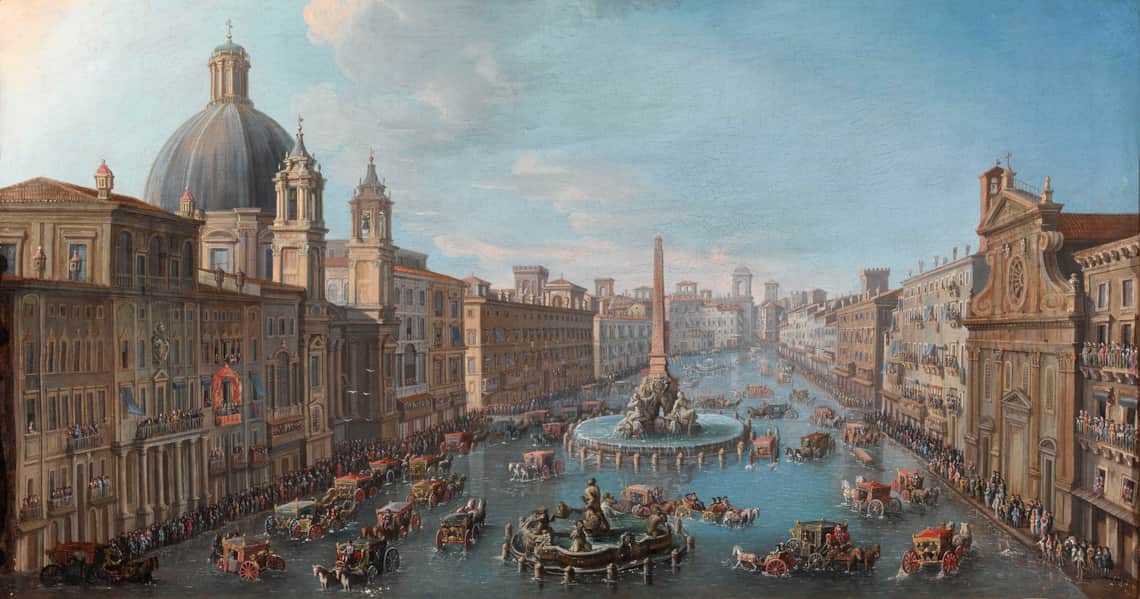 Piazza Navona was also still used for festivals, smaller games and, was even flooded on Saturdays and Sundays in summer, so the Romans could have a place to cool off (they just turned off the drainage system of the 3 fountains, and surprise - a flood!)

Beginning in the late 1400’s, Piazza Navona was the site of the main outdoor fruit and vegetable markets of the city. (In 1869, the market was moved to Campo dei Fiori). But still in this Piazza you can enjoy amazing Christmas market.

Piazza Navona is a beautiful square and it’s famous for its architecture, restaurants, and FOUNTAINS. Every day you can find tourist eating at the many restaurants in the square and enjoying view or taking pictures in front of the three famous fountains - Fontana die Quattro Fiumi, the Fontana del Moro, and the Fontana del Nettuno. People come and go, but the fountains are a constant entertainment that never disappoint!

In the centre of the square can be found the largest of three fountains in the Piazza Navona, the Fontana dei Quattro Fiumi or Fountain of the Four Rivers. Constructed between 1647 and 1651, the design was first commissioned to Borromini, but was later taken over by Bernini. The four river Gods represent the papal authority throughout the world. The Nile (Africa), the Danube (Europe), the Ganges (Asia), and the Rio del la Plata (America).

The Danube, symbolizing Europe, is represented by a figure with this hear tied back, turned towards a horse, with a huge fish beneath him.

The Rio de la Plata (silver river), holding his arm up, symbolizes submission, due to the fact that the American continent had been recently colonized. It seems as if he is blinded by the light emanating from the central obelisk, which represents the supremacy of Christianity over the four parts of the world.

The face of the Nile is veiled, as its source was still unknown at those times. The lion and the palm tree represent the African continent.

The Ganges, cradle of very ancient civilizations is personified by a bearded figure, holding an oar, sitting is an austere position with an elephant beneath him.

There is a famous anecdote about the Four Rivers Fountain.

Opposite the fountain, there is the church of Sant Agnese in Agone, designed by a famous architect Francesco Borromini. He was a rival of Bernini at that Baroque period. It's said that they had been always competing. For example, the head of the Nile in front of the facade of the church is covered by a cloth. That's because Bernini can't keep seeing this "ugly" church of Borromini. And the statue of the La Plata is stretching his arm towards the church. That is an "irony" from Bernini to Borromini, saying that to avoid a collapse of the church. 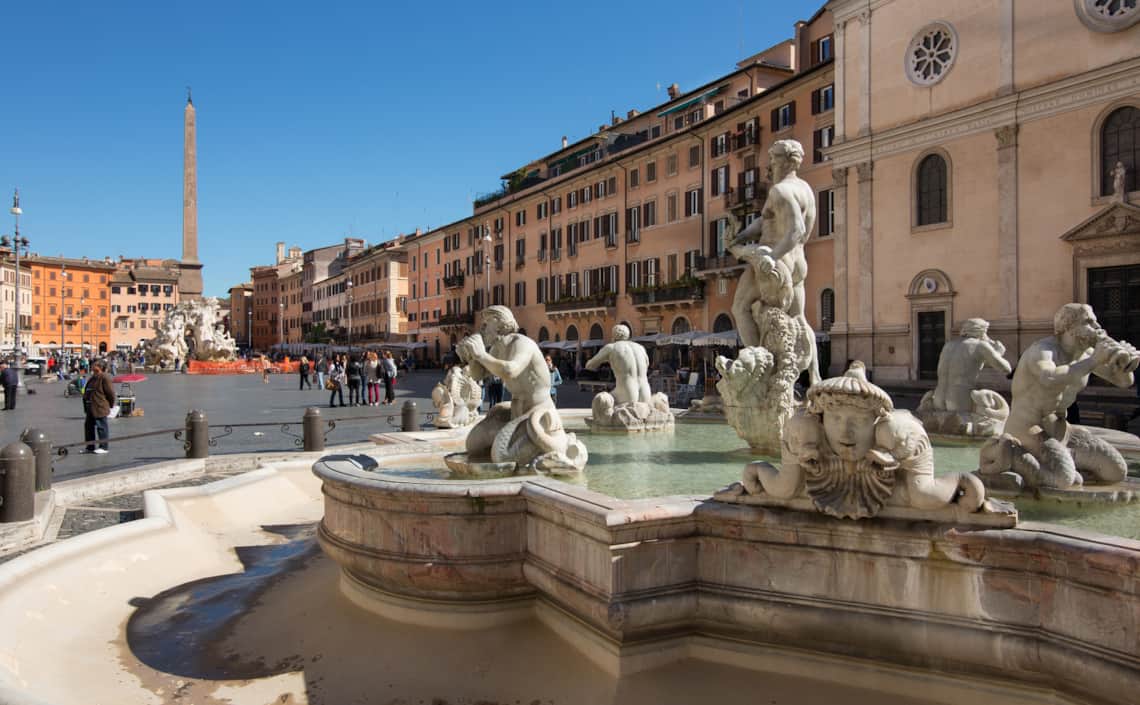 Or Moor Fountain, is located at the southern end of the Piazza Navona, and takes its name from the group of figures representing an Ethiopian fighting with a dolphin. The work was sculptured in 1654 to a Bernini design. The masks and sculptures of the tritons are copies of the originals which can now be seen in the gardens of the Villa Borghese.

Or Fountain of Neptune, is located at the northern end of the Piazza Navona. This fountain was commissioned to Giacomo della Porta in 1574, and as with the Fontana del Moro on the southern end, the material used was Portasanta, which is a rose marble. Della Porta's designed the two fountains to be similar in appearance, with tritons and large masks, but the project was never completed and for about 300 years the fountain remained undecorated. Without anything to identity the fountain, the local residents named it the Fontana dei Calderai or Fountain of the Coppersmiths. Finally in 1878, Antonio Della Bitta was commissioned to carve the statue of Neptune slaying a giant octopus, and Gregorio Zappala carved the group of 8 sea figures playing in the basin, two sea horses, two cherubs, two dolphins, and two Nereids or sea nymphs, and so the fountain was renamed, Fountain of Neptune. 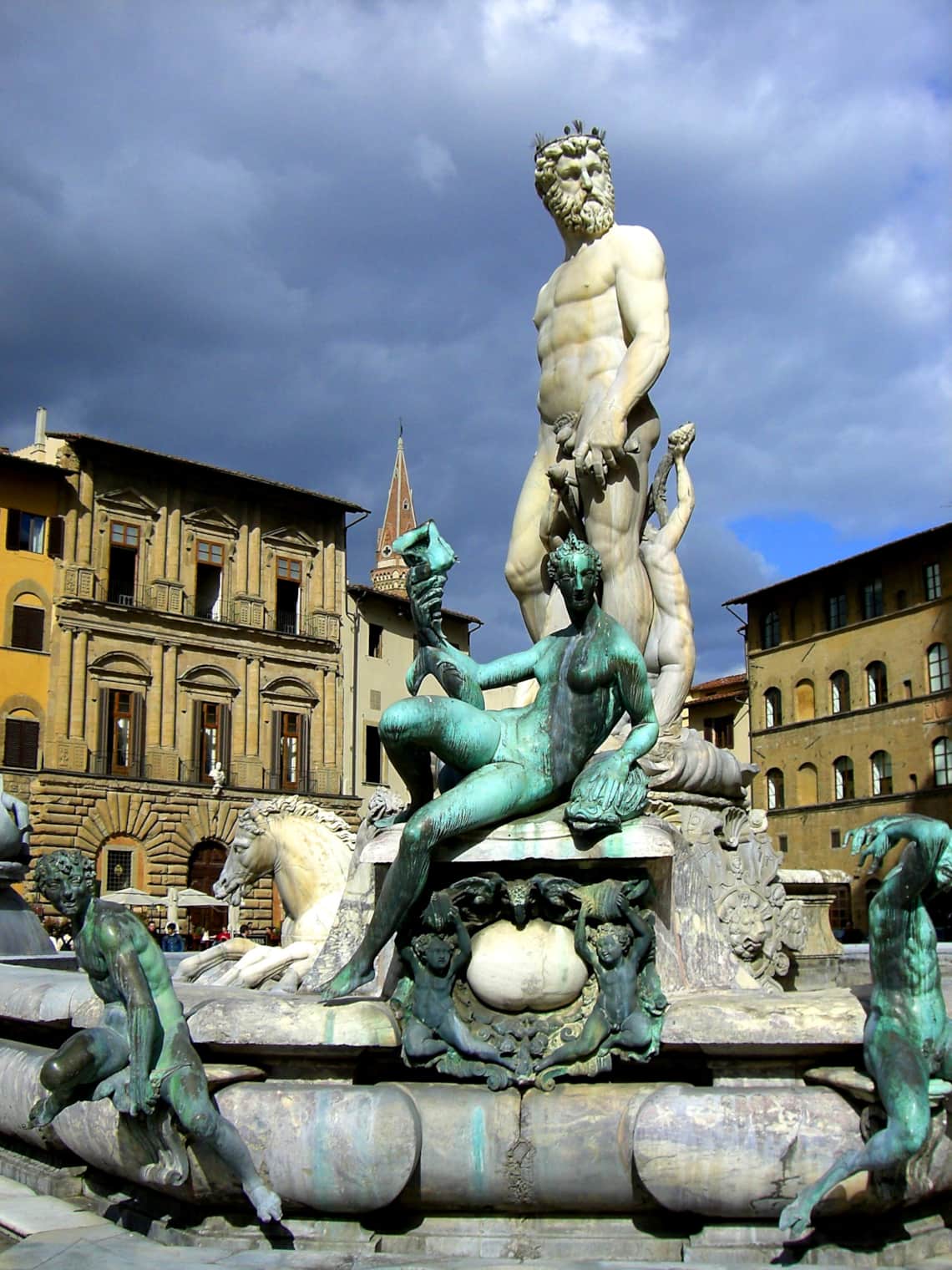 Sant'Agnese in Agone is a famous 17th century church of ancient foundation in the Piazza Navona. The original church here was thought to have dated back to around AD 300 when the young St. Agnes was martyred here. The church, which hosts an annual season of chamber music concerts, is said to stand on the spot where the martyr Agnes performed a miracle before being killed. According to legend, she was stripped naked by her executioners, but her hair miraculously grew to cover her body and preserve her modesty.

The church today that dominates the west side of the square directly opposite Fontana dei Fiumi was commissioned by the Pope just after the fountain.

Anywhere else in the world this church and its magnificence may be a major attraction, but in Rome where churches like this are found almost around every corner the volumes of tourists are mostly more prompted by its location on the Piazza Navona. 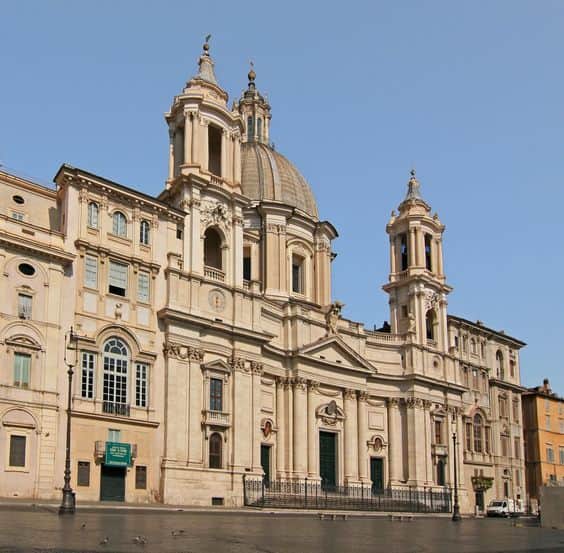 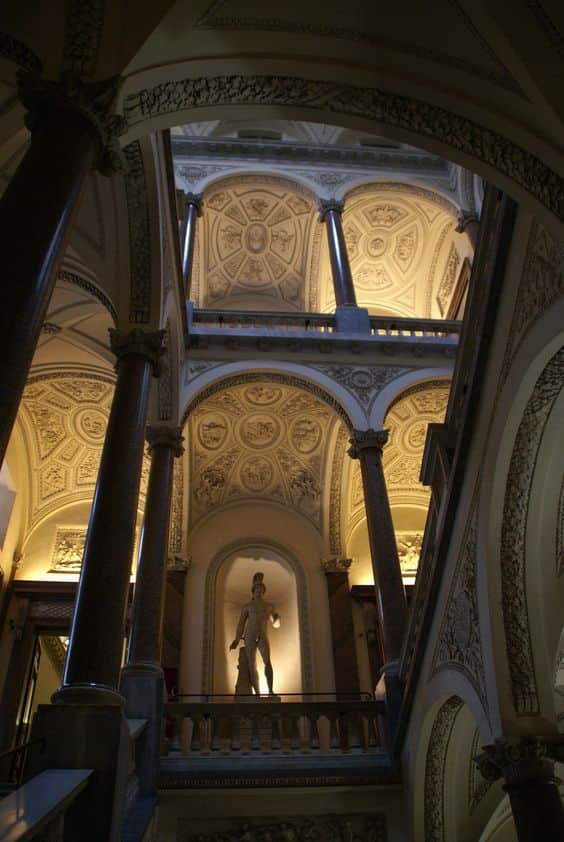 At the southern end of Piazza Navona is the Palazzo Braschi that now contains a Museum of Rome over three floors and is relatively lightly visited given the numbers that pass the door. On the ground floor is a pleasant cafe/bar and courtyard.

Just off the southwest end of the square, in a smaller piazza, sits the first of Rome’s “talking statues,” aka Pasquino. He is a worn and beaten statue from the 3rd century B.C. who was placed in the little square in the 16th-century. Not long after this, pieces of paper began to appear on his base denouncing various moves made by the rulers and politicians of the day. These pithy notes, often in verse, made public many of the complaints that people usually only spoke about among themselves. It was a newspaper opinion section before Romans had newspapers and it didn’t take long for it to become extremely popular. Despite the fact that the original satirist (who is lost to history) was caught and punished pretty horribly, the tradition lived on and to this very day anonymous gadflies leave notes stuck to the base of Pasquino ridiculing anything and everything going on in the city. 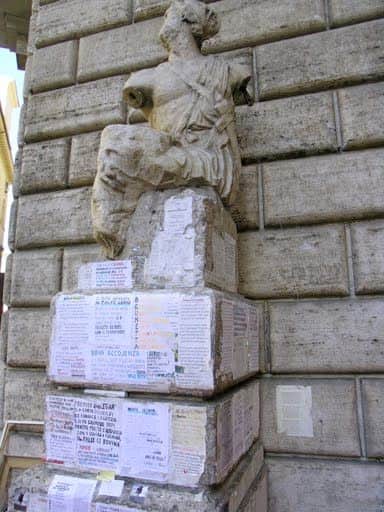 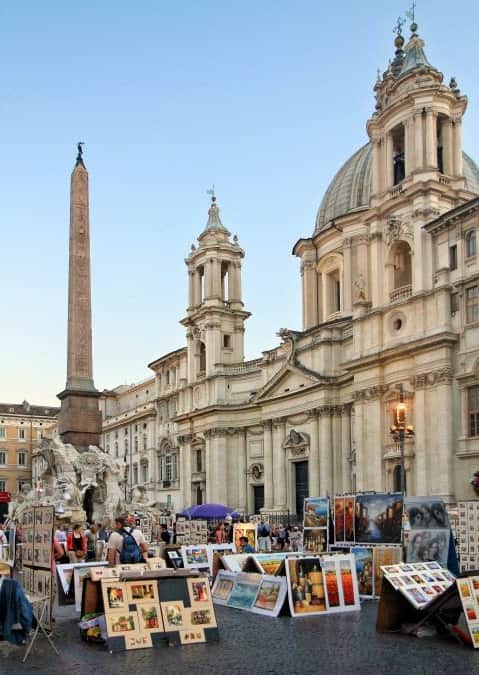 There is always something going on at the Piazza Navona - day or night. At the northern end of Piazza Navona there is many of portrait painters and vendors of art and posters in residence. The square is a major attraction in the evening when the numerous restaurants that line the square do a great trade. A great entertainment during the day is to enjoy a drink or ice cream and engage in people watching which Piazza Navona is perfect for.

Every Roman (and visiting) family stops there at some point during the Christmas season. Stalls sell Christmas decorations, gifts and sweets and street performers juggle and dance, all under the gloriously-lit fountains and Church of Sant’Agnese in Agone. For atmosphere and convenience, the 100-year-old Christmas market is a good bet. For all of December until the 6th January of the following year, you can purchase the whole range of Roman festive items.The Befana arrives on the 6th January. This is the day those children who have broken their promises or behaved naughtily receive a present of coal in a stocking. Or worse; onions, soot or garlic. Buy your own from Piazza Navona. 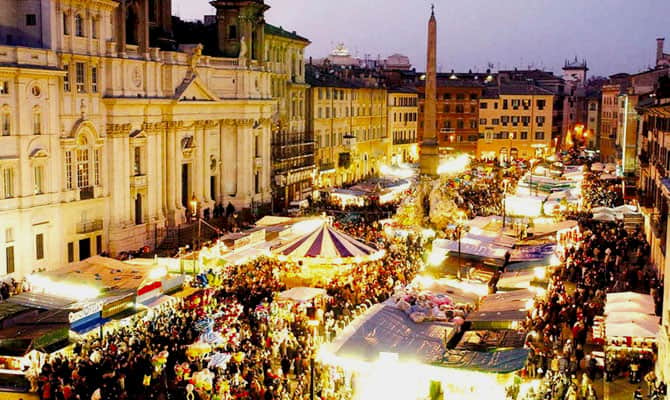 A small and cozy place, but with very large and impressive wine list - don't worry, the personnel is friendly and will help you to choose the best. They also have a small menu with a lot of small but delicious snacks, mostly starters – good place to do pre-dinners.

A small and cozy place,with an absolutely fresh and tasty hand-made pasta!

Creative dishes in a rustic-chic setting with exposed stone, vintage paintings and pictures on the walls.

Nearby Navona square you can try typical Roman dish like fried baccalà and they have always fresh fish taken in the morning.

In this gourmet Restaurant, you can eat homemade focacce and gourmet sandwiches as well served between stools and vintage chandeliers in a small room with open kitchen.

The cozy restaurant has been renovated respecting its old structure, with its beamed ceiling and its old exposed stone arches.

Here you can tasty homemade pasta and homemade dessert of traditional Italian cuisine.

It is located in Trastevere neighbourhood.

The Hosteria reflects the style of modern Trastevere with a refined and minimalist setting, trendy but linked to the cornerstones of the style that has always characterized Trasteverino charm.

It's closed at lunch time and you have to reserve in advance because it's always full!

This is a very nice Forno where they make bread, stuffed pizza or normal pizza to take away and all homemade baked food.

Here you can have a wonderful breakfast with a very special italian dessert like cannoli and cappuccino!

This is a pizzeria and here you have a lot of choose of Roman pizza and can tasty typical and fresh products as well.

Groups of tourists snap pictures of street performers entertaining for small change, or haggle with the artists hawking their watercolours on wobbly display stands, and lovers who smooch on the marble benches surrounding those splashing Bernini fountains, while kids kicking soccer balls over their heads.

Snappy waiters rushing amongst the tables in cafes carrying trays with fresh cappuccino or, as the afternoon wears on, red Campari-sodas.

It is magical square and don`t even waste your time on searching reasons for not to see it!

Loading...
Upps!
You're running a web browser we don't fully support. Please upgrade it for a better experience.
Our site works best with Google Chrome.
How to upgrade the browser